The Intro and Regulations classes start in about a half hour! Pretty excited to get these going at NWTC. It’s going to be a fun ride. 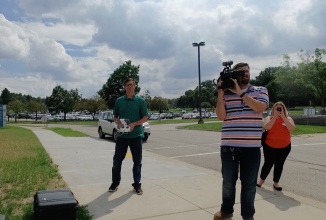 I’m writing some classes for Northeast Wisconsin Technical College, where I teach video production, about UAS/Drones. Our local Fox affiliate was out today to interview me for a piece about the courses, and drones in general. I so much prefer to be behind the camera than in front.

This video on Color Correction is awesome. Very short, and to the point. Not necessarily a how-to, but why and how it can make things better. Nicely done.

Fall 2014 is right around the corner. Instructors are back at school for prep days. For us in the Digital Media Technology program, it’s always a maze for a few days navigating updated software, new login info in the classrooms, adjusting classes and coursework as necessary for incoming students. There’s enough excitement to go around as we get things in place.
I thoroughly enjoy teaching this stuff, there’s a satisfaction to pass along something that I am personally so passionate about.

So far so good with the Spring 2014 semester. 3 weeks in, a couple of projects seemingly rolling along nicely. I’m always reminded of how it was when I started a project in After Effects and had that blank slate. It was always rather intimidating, given that I knew very little about the program when I first started using it. So when I start handing out projects to students, I’ve got this nostalgia in the back of my mind of that intimidation, of having to create something out of nothing in what can be a rather freaky and confusing software environment. After a while, no big deal. You get used to the toolset, the interface, just how to make something in After Effects. But at first, whew. I was just glad I had @rovino to pester when I had questions!

Was asked today by a guy on Twitter about what some of the challenges are as an instructor teaching post production.  We dm’ed back and forth, hopefully we’ll connect again, but it really got me thinking today.  Twitter was not the medium for the conversation, hopefully we’ll be in touch in the near future, but thinking about it, at the moment, I had to say one of the big challenges is seeing a student who “gets it” and one who doesn’t “get it”, one for whom the toolset, whatever application it is, works for and with them, and one who is all thumbs and left feet when it comes to the intricacies of storytelling.  How does one work with that student for whom the editing process doesn’t quite connect?  Got me thinking.

Wow, lots going on.  Summer is pretty much officially over, and I’ve been in the deep end of the pool getting ready for fall classes to start.  Couple of new ones for me this semester, I’ll be teaching an Intro to After Effects course, taught it before, but new to NWTC where I currently teach.  Also new to me is teaching Scriptwriting, among other classes that I’ve done before.  Should be some fun stuff ahead.  Also getting started on FVTC’s Video Publishing class, an online only class looking at the basics of video production, very much an intro, ‘get your toes wet’ type of class.

Couple production projects in the wings that have been on hold for the summer, hoping to get rolling with those this fall, and a few other ideas/projects buried deep in the notes section of my Google Drive that I hope to get launched in the coming weeks/months.  Good to be busy, right?!

I had the opportunity to sub for a class yesterday at the college I teach at.  I’m on summer break, by the way, and not currently teaching.  And yes, I’m enjoying myself immensely 🙂 Anyway, I filled in for one of my colleagues for his motion graphics class that runs Apple Motion.  I’ve been an Adobe After Effects guy for quite a few years, only dabbled in Motion here and there. I’ll be teaching a class on After Effects in the fall.

I have a lot of thoughts going on about these two pieces of software.  Motion is $50 and plays very well with Final Cut Pro X.  After Effects is, well, whatever the current going rate is for this whole CC stuff (blah, blah, blah… don’t get me started), and of course plays well with Photoshop and Premiere and everything else Adobe has to offer.

Without going into too much about Adobe’s new pricing structure, I’m wondering first of all, how many people in the industry actually use Motion on a regular basis, and if they do use it, are they using it in conjunction with Final Cut Pro X, 7, Premiere, Avid?  Obviously its only available on the Mac, so that cuts out quite a few folks right away.  After Effects has such a massive place in the Post Production industry at so many levels, but just how will the new Creative Cloud subscription/rental/whatever model effect certain users?  This crosses over into the realm of which NLE one uses as well.  So, if one is on a Mac, and one does not want to, or cannot afford to jump on Adobe’s bandwagon of subscription goodness, what do you do?  Do you look into the much maligned, but actually very functional Final Cut Pro X/Motion combination?

My opinion, as it stands now, is that I’d have a VERY difficult time doing this.  There is no substitute out there for After Effects, just as there is no substitute out there for Photoshop.  There are posers, applications that try to come close, but sorry.  Nothing quite measures up.  Motion is quite handy, has a lot of tricks up its sleeves, even does a few things better than After Effects.  But as a tool in the industry, it just does not have the clout.

I am still curious, how many users are there out there who actually start up Motion on a daily basis and create motion graphics for whatever purpose; broadcast, corporate, freelance, etc.

Perhaps I’ll write more about the differences between the two as I do more work myself in both applications.  Also plan on doing some research on this topic.  Chime in with your thoughts, very curious to hear what the post production and motion graphics world has to say.